In last week’s episode the Pale Moon Circus debuted with plenty of familiar faces entering the stage. As a devoted “old-school” Pale Moon player (pre-G) I was really excited for the episode and the creators did not disappoint. We saw old cards like Purple Trapezist, Midnight Bunny, Hoop Master and Nitro Juggler with brand new skills, which not all have been confirmed and released yet.
I was convinced Bushiroad would reveal at least some cards on the Tuesday Stream and they delivered. We got Golden Beast Tamer, Magical Boxtreamer and Midnight Bunny. I will also cover Nightmare Doll, Alice and Jumping Jill, which were COTD a few weeks ago.
About the VR of the set, GBT got 2 skills:
[CONT](VC): During your turn, if you have five or more units, all of your front row units get [Power]+3000.
[AUTO](VC): When it attacks, COST [Counter Blast (1) & put a card from your hand into your soul], and call up to two cards from your soul to (RC).
Simple, effective and exactly what Pale Moon needed. The +3K makes a difference in creating numbers and hitting Force clans with their 13K body base. The on-attack skill does eat a card from your hand but it’s usually something you would have called anyway, so that hardly matters, since her second skill is a nice +1. The bright side of putting a card into the soul from hand instead of Soulcharge (1) is that we can control what we put in there, so we trade quantity for quality in a sense, since cards like Jumping Jill only proc when placed from soul. 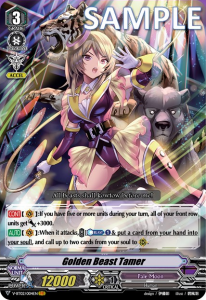 The next card is Magical Boxtreamer, which’s skill is as follows:
[AUTO](VC): When an attack by your opponent’s unit hits this unit, COST [Counter Blast (2) & discard a card from your hand], and call up to five cards from your soul to (RC).
[CONT](RC): During your turn, if your soul has “Magical Boxtreamer”, this unit gets [Power]+3000.
A pretty gimmicky card, which I don’t really understand the purpose of. It allows the player to “punish” the opponent by attacking it but for a cost of Counterblast (2) and a discard it’s not really something you would want to do especially since Standard Pale Moon looks like it’s going to be quite Counterblast heavy.
On the other hand the +3K could make a difference, since it enables numbers but I don’t know how I feel about using a card solely for the power-gain. Jumping Jill and Nitro Juggler should be of relevance to the deck and my Pale Moon heart still hopes for Crimson Beast Tamer and Barking Cerberus. 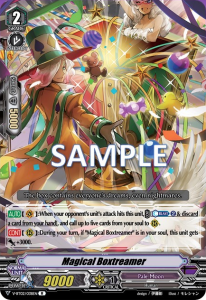 Next up, Midnight Bunny:
[AUTO](RC): When it boosts, Soul Charge (1).
[AUTO](RC): When an attack that it boosted hits, COST [Counter Blast (1) & put this unit into your soul], and call a card other than grade 1 from your soul to (RC).
Bunny is back and beautiful as ever. Midnight Bunny’s skill hardly differs from her original skill, so the saying what isn’t broken, doesn’t need fixing applies pretty accurately. But what makes bunny so much better from her original counterpart is her Soulcharge on-boost ability. It provides soul every single turn, not to mention when you have 2 or more of her on the field. 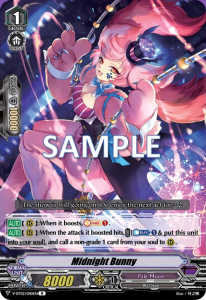 Our favourite and beloved doll, Nightmare Doll, Alice:
[AUTO](VC): When placed, call up to one from your soul to (RC), and that unit gets [Power]+5000 until end of turn.
[AUTO](RC): At the end of the battle that it attacked, COST [Counter Blast (1) & Soul Blast (1) & put this unit into your soul], and call a card other than grade 3 from your soul to (RC).
I love the fact that Alice is back and love her new art even more (I’m probably the only one, who hopes for the OR to be something different than Alice.). The on-place skill is amazing since Alice has the Accel Gift, so he can call out Jumping Jill to the newly created Accel circle for other shenanigans. Let’s hope for more cards in the set, preferably useful Grade 1s.
What irks me a little bit is Alice’s Soublast (1) cost in her second skill. This is Pale Moon we’re talking about, will we really have that many resources to actually burn some of it? With Midnight Bunny’s blind Soulcharge perhaps we could use the accidentally soulcharged triggers but otherwise I find her cost a tiny bit over-costed. But she doesn’t have to hit anymore, so there’s that to consider as well.
But with Accel circles and Golden Beast Tamer, Alice could be a real threat. Granted, it would cost quite a few counterblasts but calling 2 Alice with GBT’s skill could be fatal for the opponent. I’m curious as what other combos we will be able to do with the yet to be revealed cards. 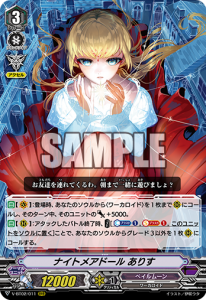 And the last card is Jumping Jill:
[AUTO](RC): When placed from soul, COST [put one of your other rear-guards into your soul], call a card other than grade 2 from your soul to (RC) in the back row.
Basically a Purple Trapezist kind of skill if I say it simply. It’s a little bit restricted as Jill has to be called from soul and is basically bound to call Grade 1s since it has to be called to the backrow. But I suppose there’s a good reason for that to prevent spamming and perhaps some infinite or semi-infinite loops now or in the future. 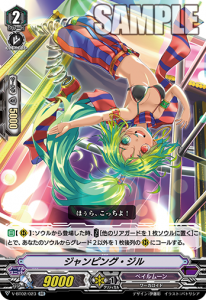 Pale Moon looks pretty good right now and I can only hope they receive some kind of Countercharge engine. Otherwise I’m pretty happy and am super glad that my favourite clan is back and glorious as ever.